This is an impressive commercial

I don't generally like TV commercials while I'm watching TV. But that doesn't mean I don't like commercials. I like to watch the good ones, especially when they're not interrupting a movie or a good show.

With an election campaign on in both the US and Canada, there's been a lot of pretty awful ads lately. But this one is a great ad.

It's for a product that I don't think is available here in Canada. But after watching this ad, I wish it were. I like a company that things this is a good use of their advertising dollars.

As someone who spends a lot of time talking about the importance of reputation and image and high-quality tools -- I love this example.

Email ThisBlogThis!Share to TwitterShare to FacebookShare to Pinterest
Labels: Reputation

Going car-free not as easy as it sounds


I've managed to take my bike to work a few times since my last post. It takes me about 35 minutes and I wander along some nice trails, largely skipping busy streets. I've also picked up a monthly bus pass for those trips downtown or other places where I don't want to take my bike and have to find a secure place to lock it up.

This weekend, I went out and bought a nice set of pannier bags, so I can make short trips to the grocery store or the library and be able to carry stuff home easily. They're also great for carrying rain gear on my commute. That's definitely required here in Victoria - especially in the winter.

So the pieces for my switch to a more carbon-friendly approach to my life are coming together. But you know, it's still tough to consider giving up my car.

It's not because my car is unique or high-end or anything like that. In fact, it needs expensive brake work and it leaks when it rains. But I still find it nice to have. Whether it's taking the dogs to the park for an extended outing or a quick trip up to Langford, where our storage locker is located, or even running Jaime and her bike back home after supper, when it's too dark to ride - it sure is handy to have a car.

So for now, I've decided to keep the car around. I'm using it a lot less and that's a good thing. But I'm not ready to sell it just yet. I am really enjoying my bike and although the hills in this city make biking a challenge, the abundance of bike lanes and trails keep me happy. I'll see how it goes when the wet, cool weather arrives in a month or so.
Posted by Dave at 12:49 PM No comments:

Email ThisBlogThis!Share to TwitterShare to FacebookShare to Pinterest
Labels: Commuting

Time to do my part

So today the federal election campaign starts in earnest. But while I used to live and breathe politics, today my reaction is more like the little guy on the right. Sure, there are important differences between the parties and candidates, etc., but I can't help feeling that whoever wins the election doesn't have that much relevance to what happens in my life. Call me cynical but that's the way it is.

However, that doesn't mean I'm not interested in things. In fact, I've decided that my goal for the next while is to figure out ways to reduce my own carbon footprint. And I figured that since I've been having trouble coming up with reasons to update this blog recently, I'll share my journey with you all.

The first thing I've done is to make a commitment to using public transit to get around instead of driving. I was a pretty dedicated user of public transit when we lived in Hamilton and I worked in Toronto - I spent a lot of time on Go Trains and buses. But since we moved to Victoria, I've tended to drive when I needed to go downtown or more recently, get to the office.

So for the last few weeks, I've been buying bus tokens and travelling to work by bus. Last week, I upgraded to a monthly bus pass. Travelling by bus is longer (about 50 minutes one way, as opposed to 10 minutes by car) but it gives me a chance to catch up on podcasts on my Ipod. So I don't mind the extra time. However, when I go to work by bus, I can't get home at noon to walk the dogs -- that could be a problem.

I haven't decided whether to get rid of my car for good yet. It's a 1994 VW Jetta that needs a brake job but is otherwise still a good car for around town. I'm tempted to keep it around to have for taking the dogs places and picking up groceries, etc. But I may get rid of it too, depending on how well my second major carbon footprint idea works out. 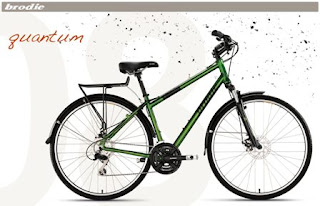 And that idea is a new bike, which I finally picked up last week. It's a hybrid, a cross between a road bike and a mountain bike, which has some of the features of both. It's a great commuting option and since I live in Victoria - where bike commuting is a realistic alternative year-round - I'm looking forward to making that option work.

I'll tell you more about how that's going in my next post.

Email ThisBlogThis!Share to TwitterShare to FacebookShare to Pinterest
Labels: Commuting

Why I didn't make the Olympics

I've been away. If you were wondering what I was up to, check out the video below. One thing I wasn't doing was attending the Olympic Games.

Ever wonder what it takes to get to the Olympics? Well, here are some examples of performances that won't win you a spot on the team.

The video is called Why I didn't make the Olympics.

(Note: I'm not sure why there appear to be two images of the video appearing here...but clicking on the top one seems to work.)