Buckets of Grewal - the name says it all

If you've been watching the news out of Ottawa, you'll know that today the debate on the same sex marriage bill is supposed to wrap up and a final vote will happen, leaving the way clear for all the MPs to head home for their summer break.

To say this was an eventful session is putting it mildly. But one of the enduring controversies of the past few weeks has to be the strange affair of Gurmant Grewal and his claims to have been seduced by the Liberals, only to turn the tables and release his controversial recordings of the seduction.

I've just heard about Buckets of Grewal an interesting blog devoted to the Grewal affair. There's an obsessive amount of detail here, including a slide show on Flickr that compares the original transcripts with the newer versions. Fascinating stuff, in a political geeky kind of way.

Thanks to Geoffrey Rockwel at McMaster University for pointing me to this item.
Posted by Dave at 2:16 PM No comments:

Having a "bad air" day 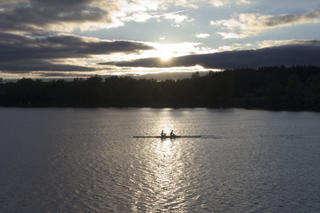 We've been struggling out in these parts in recent days. The air quality has been terrible, to say the least.

Last weekend, the girls had a regatta in Welland. On the way down, I thought the fog had rolled in, the air was so thick. But it was just more smog, blanketing the countryside as far as we could see (which wasn't far.) One of the rowers heard on the radio that outside activities should be limited to 15 minutes...hmmm.

I wonder how long it will be before we are forced to start taking this air quality thing seriously. In recent days, it's been above 30 C most days, and the humidex has been over 40 C. Yet nothing really has changed for most of us. People still drive everywhere, work continues, traffic is heavy, sports events continues. But the doctors are warning us that we're suffering, even if we don't notice it right at the moment.

After her race, Kelly was having trouble breathing deeply, the same problem she had last summer after big races. I don't think there's much doubt that the bad air is having an effect. It's going to become a bigger issue as we go along. For now, we're just trying to stay cool and get through it.

By the way, the photo up top is from Fanshawe Lake near London. That's where the Summer Games trials were held a couple of weeks ago. Blogger just set up a new posting service, so I'm experimenting with posting a pic to the blog. Nice shot, eh? The air was a lot cleaner then...
Posted by Dave at 12:18 PM No comments:

How much stuff do you carry around?

If you're like me, you probably end up carting around way too much stuff on a daily basis. But what to do?

Over at Celsius 1414 Robert Daeley considers all the stuff that people carry:

For an era when millions of urban folks have supposedly left behind the burdens of a rural existence, we sure are burdening ourselves like pack mules. Take a look around at the next business gathering, especially if there are a lot of geeks in the room -- check out the bulging cargo pants and Bat-Belts of devices, the modern geek's pocket protectors. Wonder at the laptop bags and suitcases with hidden crannies stuffed full of all manner of supplies.

Check out the full post and consider where you fit in on this spectrum.
Posted by Dave at 6:35 AM No comments:

It's Father's Day, but it's hard to feel really happy today. Both of my daughters were trying out for the Ontario Rowing Team that's going to Regina in August for the Canada Summer Games. But alas...they both missed the cut today.

Both Kelly and Jaime had a good shot at the team. They have been training hard all year, and were very excited about their prospects. Heather and I were in London on Friday and Saturday for the trials. I was there with my new stop watch that the kids gave me for my birthday. It lets me keep track of their stroke rate, just like a real rowing geek, so I love it. Last night, we were the only people watching from the grandstand...But when we left to come home last night we were optimistic that we'd get good news this morning.

But about 9, Jaime phoned in tears. She and Kelly and Kelly's boyfriend, Spencer Brewer, all lost out in the final decisions. They were devastated. In fact, they were so upset they booted it out of there without their boats, which they had to go back and pick up after breakfast.

My heart aches at times like this. Sometimes it's really hard to be a parent and watch your kids have to deal with tough lessons. You want so much to help but there's really nothing to do but be supportive and let them know how proud you are of their dedication and their talent. They did their best and that's all you can ask. In the end, the decision was made and now they have to accept that. Still...it would have been fun for them to have rowed in their hometown.

There's a part of me that can't help feeling my kids got shafted, I've got to admit. Rowing is an elite sport, no question about it, and sometimes it seems like who you know and where you're from count as much or more as anything else...but that's probably just me tasting those sour grapes. So I won't dwell on it.

For now, it means both Kelly and Jaime can turn their sites to the Henley Regatta in early August. And their prospects for doing well there with the Leander Boat Club look really good...so now the training continues, but with a different goal in mind. This really is a great sport.

As for Father's Day...well, I've got the best kids in the world. Jaime just called and says they've both recovered from their shock and disappointment and now they're on their way home. And Cory just called because he was thinking of me. That's all I really need to hear.
Posted by Dave at 9:04 AM No comments:

Why is "real news" losing ground?

Do you watch "The Daily Show with John Stewart?"

If you do, and it seems that a lot of people are, then you know it's a show about the day's events that prides itself on delivering "fake news." Yet, more and more Americans (and I suspect Canadians as well) claim it as one of their best sources of news of the day.

This article from MediaChannel.org takes a look at the phenomenon of fake news and what it says about the current state of journalism. It's a good read.

And by the way, The Daily Show is on most CTV stations at midnight, after the local news (and 11 on the Comedy Channel). Try it, you'll like it.
Posted by Dave at 1:11 PM 1 comment:

I wish there was a way to capture this on film. I'm sitting at Union Station, in Toronto, waiting to go out for dinner with my brother-in-law from Vancouver. He's here in town on business, and we've arranged to meet downtown. I had some time to kill, so I'm camped out in the Via lounge area, where I've got Internet access.

But what is really cracking me up is the guy sitting next to me. For the last five minutes, his cell phone has been ringing and he keeps answering it. "Hello?" he shouts. "Hello?" again, a little louder. "HELLO!?" he's shouting, now for the fourth or fifth time. It's clear that whoever is calling is trying to drive him crazy...at least judging by how red his face is getting as his frustration mounts. It's very, very funny.

What he doesn't seem to realize (unlike the rest of us, apparently) is that the ringing he's hearing is actually the notification for an incoming text message. At least that's what it sounds like to me. And sure enough, each time he holds the phone up to his ear, I can see the flashing light that indicates a message.

I'm torn as to what I should do. Do I tell him? Or do I let him keep trying to figure out what the heck is happening? It's certainly entertaining for the rest of us...although it is getting a bit tiresome. His shouting is getting louder and louder and he's obviously losing his cool. An interesting social experience, in a perverse, downtown Toronto kind of way.

Finally, I can't take any more.

"Excuse me," I say, tapping him lightly on the arm. "But I think that signal means you've got a text message or a voice mail, not a phone call."

"What the hell is a text message?" he asks, turning towards me with the phone still plastered to the side of his head, looking at me suspiciously. I don't think he realizes I'm talking about his phone.

"I think the ringing is because there's an incoming text message. Someone is sending you a message, like an e-mail, on your phone," I try to explain, pointing.

Slowly, he takes the phone away from his ear and looks at it, not appearing to understand what I'm talking about. So I point at the tiny screen on his phone, which looks to me to have something written on it. Sure enough, as he looks at it, I can see the gears click into place and his face starts to turn red again. But this time, it's not from yelling.

"Well, I'll be damned," he mutters to himself, giving me an embarassed look, not surprising in the circumstances. Then he glances around at the other people in the lounge. Several pairs of eyes look back at him, most of them with smiles and one lady is laughing out loud.

Without another word, he picks up his briefcase and heads out of there, looking to read his newly discovered message somewhere where he won't disrupt anyone's concentration.

Suddenly, the phone in my pocket rings, startling me. As I open it, I do a double check, just to make sure it's really an incoming call. "This time, there is someone calling," I confirm to the others, who smile back. Time to head off for dinner.
Posted by Dave at 2:41 PM 1 comment:

Why I haven't been writing much

OK, this isn't the real reason why I haven't been too active. But this article in today's Globe is in the ball park.

Career's columnist Judith Timson talks about "last-minute-itis" and how it's sweeping the nation. Even stay-at-homes like me, with little apparent reason to be behind in what I do seem to be affected by it. Whatever it's cause, I do seem to be behind the eight-ball on all kinds of things. Like for instance, I'm supposed to be at the university in a few minutes to meet somebody...so I'd better run.
Posted by Dave at 8:54 AM 2 comments: