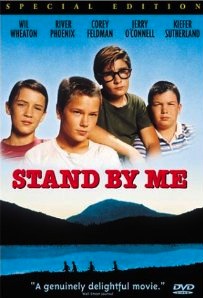 Stand By Me was an adaptation of one of Stephen King's short stories and it became a monster hit in our household many years ago. At some point, I taped it off the television and for about two years, it seemed that every time I looked, one of the kids was watching it. I'm not sure what it was that fascinated them so much, but they were hooked.

It's been a long time since I've seen it, but this week, one of the child stars, Wil Wheaton, wrote a moving article on his blog, called "Though I hadn't seen him in 20 years, I knew I'd miss him forever."

It tells a story (Will is a writer himself now, just as his character in Stand By Me became) about joining the other cast members and director (Rob Reiner) from the movie for the first time since the movie was released. They were taping interviews for a just-released Blue Ray special edition. Notably absent from the reunion was River Phoenix, who died of a drug overdose a few years after the movie appeared and who had been a friend of Wil's.

Even if you haven't seen the movie (which I recommend you consider renting), take a look at Wil's post. It's a wonderful, honest view of what it's like to watch your life wind by and the mystery of how we end up where we are.

Perspective is everything when it comes to information

This arrived in my inbox today (so if e-mail is now email, is it in-box or inbox?) and it sums up a lot of issues that are far from resolved for those of us who make our living working with information. (Click on the picture for a larger image.) 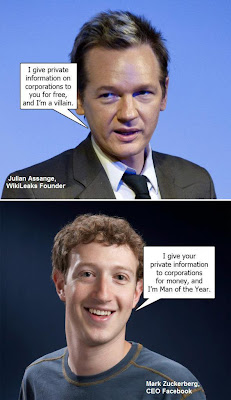 I can think of a couple of cliches that could apply to the picture above...

"There's two sides to every story."

"He who pays the piper calls the tune."

Have you got any other suggestions?
Posted by Dave at 1:13 PM No comments:

It's supposed to be "the happiest day of the year!" And so what better way to start the day than with an Irish-themed flash mob.
Here's what happened in Sydney early on March 17th.
Posted by Dave at 1:47 PM No comments:

Locked in a Vegas Hotel Room with a Phantom Flex

This video is a real treat. It's fascinating to see what's really happening during normal events, like the shower running or a drop of water splashing off a desk.

Not a bad way to spend an evening, all in all!

Locked in a Vegas Hotel Room with a Phantom Flex from Tom Guilmette on Vimeo.

I was working a gig in Vegas with a brand new Phantom Flex high speed digital cinema camera. I had to try it out. In fact, I never did go to bed that night. I opened up a wormhole shooting at 2,564 frames per second.