This could be useful.

One of the problems I've had lately is that I spend a lot of time on Twitter or Facebook and less time writing blog posts. So I've downloaded an app for my phone that will let me post to The Daily Upload. I can also upload pics. 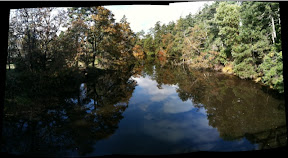 This one was taken on my walk with the dogs the other day. I used autostitch to create a panorama.

- Posted using BlogPress from my iPhone

Parkour on a bicycle

Via Kottke.org, we have a terrific way to start a Friday.

Danny MacAskill's creativity on a bicycle is without peer. Sure, it may be dangerous, and you might not recommend it to your kids, but you've got to admire the skill level.

This first appeared a few weeks ago. But I hadn't seen it before. I was surprised at how many of the clips I recognized.

Have a look for yourself. And if you want to see a list, go to the YouTube page, where they've got a link to all the clips.

The story of TPN - it saved my life

I had a series of medical problems in 1996, which cascaded into a full-blown crisis that ended with me sacrificing a few of my inner organs in order to stay alive. Thankfully, it all worked out fine and I'm still here today.

The one thing that may have been the most important reason I'm still around to talk about this was something called TPN - (Total Parenteral Nutrition.) It's a way of getting nutrition without using your digestive system. I still have a cool scar on my jugular that I can show you sometime.

I was on TPN until after my surgery, about 4 or 5 weeks in total, I think. It was literally a life-saver, but I never bothered to find out much more about it.

Today, I ran across this interesting post, about the story of TPN and the woman who was the human test subject of it. It's called "Lifeliner: The Judy Taylor Story." Judy Taylor lived for 20 years without eating, thanks to TPN. The book is written by Shireen Jeejeebhoy.

Here's the blurb about it:

Thirty-four-year-old Judy Ellis Taylor relished her simple, happy life. She had a loving husband, three young daughters, and a beautiful home. But Judy’s life changed dramatically in 1970 when intestinal blood clots annihilated her digestive system, leaving her with the certainty of starving to death in a cold Toronto hospital.

Back in 1970, most doctors still considered long-term intravenous feeding, then called alimentation or hyperalimentation, to be science fiction. A radical young immigrant doctor sought to change that through his groundbreaking research on what is now known as TPN (Total Parenteral Nutrition). Judy’s surgeons heard of Dr. Khursheed Jeejeebhoy’s work and sent her to him; together Judy and Jeejeebhoy agreed that Judy’s only hope was to become a human test subject for TPN, and even more radically Home TPN.

Judy became the first lifeliner, the first person to live without ever eating one morsel of food. And Jeejeebhoy was the Canadian physician who made it happen. Like Banting and Best before them, this pioneering duo made medical history. For the next twenty years, Judy and Jeejeebhoy, or “Jeej” as Judy called him, worked to develop and hone TPN.

Judy willingly lived with the possibility of death every day, learned to love her TPN lifeline, learned medical terms, and endured medical tests and strange symptoms in spite of her fears so that she could live. But she didn’t just live on TPN, she served as a guinea pig for nutritional research and inspired others to accept TPN into their lives. Fellow lifeliners relied on Judy to give them the courage to live on TPN, to show them that normal life was possible on TPN. Her neighbours and community enjoyed her zest for life, her baking, her singing, and her willingness to help out wherever needed. She did that while raising three girls, cooking dinner for her family nightly, even though she could not touch a bite.

It looks interesting, especially for someone like me, who has a personal connection to the story.

This is something I haven't heard anything about in the media around here. Interesting. I'm re-posting this blog post from Boing Boing. Looks like it could be an interesting issue. I expect we're going to start hearing a lot more of these kinds of stories as Olympic hype gets into high gear around here.

"Shawn sez, 'The British Columbia Civil Liberties Association is aiding two activists in suing the City of Vancouver over a 2010 Olympic bylaw which may encroach on free speech and violate Canada's Charter of Rights.'

With David Eby of The B.C. Civil Liberties Association representing them, Chris Shaw, a UBC professor of ophthalmology, neuroscientist (and Vancouver Observer blogger), and The Olympic Resistance Network's Alissa Westergard-Thorp,announced this morning that they have filed a statement of claim against the City of Vancouver in the Supreme Court of BC. Their lawsuit challenges the constitutionality of an Olympic bylaw limiting free speech during the 2010 Winter Games that was passed by council in July, Eby told reporters this morning.

The BBCLA, with plaintiffs Shaw and Westergard-Thorp, claim their rights to free speech and freedom of movement will be denied once the Winter Games by-laws passed by city council take effect. They say the bylaws, commonly referred to as the omnibus bylaws, will infringe their Charter rights and are unconstitutional....

The bylaw includes a passage entitled 'prohibitions regarding city land,' which includes a clause that will almost surely trigger a Charter of Rights and Freedoms challenge. Clause 4B makes it illegal during the Winter Games without authorization to:

Protest signs usually are made using sticks, often are larger than subsection (iii) allows (as are puppets and other protest devices), demonstrations almost always employ megaphones or other voice amplification devices, and can well 'interfere with the enjoyment' of the Olympic spectacle by who chose to be so offended. Protesters often pass out leaflets as well. Thus, any of the dozens of protests I've attended over the last few years would easily be in violation of five of seven subsections.

Disappearing in the Digital Age

Wired magazine ran a cover story in September about disappearing in the digital age, which profiled a guy who tried to fake his own death. It also went through a lot of the ins and outs of trying to erase your past - and how the people trying to find you do that.

But an interesting postscript to the story was a $5,000 reward to anyone who could track down Evan Ratliff, the author of the story. He had agreed to try to disappear after the article appeared. If he could stay hidden for 30 days, he'd earn an extra $3,000. The recap of the hunt for him is here.

Ratliff was eventually found but the story of how that happened is a worthy article itself. And that's what Wired will be publishing in their December issue. Ratliff is talking to everyone involved in hunting him down and it should make for interesting reading.

Who hasn't imagined just disappearing for good at times? It may be for romantic reasons, or just the urge to chuck it all and start over. But it appears that doing so is not as easy as it once was. As Google and other social media sites catalogue more and more of our digital lives, it's just going to get harder and harder to disappear.

Not that I was considering it of course...but still.
Posted by Dave at 3:06 PM No comments:

Over five years of words

This is interesting. There's a fun site called Wordle.net where you can type in the name of a blog site, or just a bunch of words, and it will create a Word Cloud, based on the text supplied.

So I put in The Daily Upload and this was the result. Not sure what to make of all this. Or should I say I don't SEE what the point is... 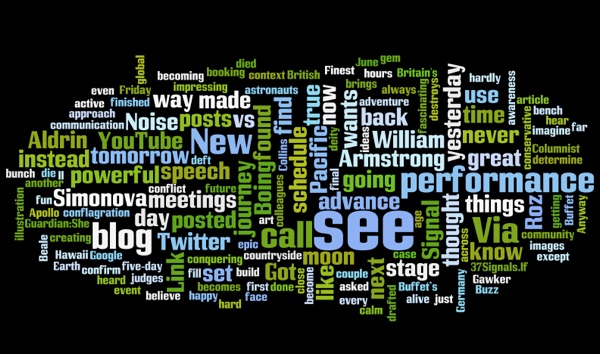 Try it yourself at Wordle.net

Thanks to Tris Hussey for the pointer.
Posted by Dave at 9:39 PM No comments: