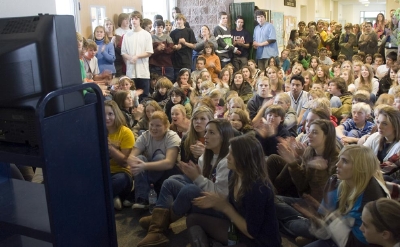 Yesterday, I listened and watched, like most of the world, it seemed, as Barack Obama was sworn in as US President.

Then today, I read about it in the morning papers and on blogs and websites everywhere. Then I found this site, The Big Picture, which pulls together the best news photographs of the event from all over the world.

It's an amazing collection of photos and if you're enjoying this moment in history as much as I am, you'll want to take a look at some of these.

The site is worth bookmarking or adding to your RSS feed.

- AP Photo/Nathan Bilow
Posted by Dave at 6:13 PM No comments:

I've been busy not writing

I haven't had anything to say recently, as you may have noticed. There have been things going on and I thought about posting items during the holidays but it didn't happen.

We've moved into a new house and we're back at work and getting boxes unpacked and all that...I could have probably come up with a post around that sort of thing. But I didn't.

The weather has been kind of crazy everywhere and I did post some stuff about that and could have found more stories but I didn't.

Australia came up with a great PR stunt by trying to hire someone to live in luxury on the Great Barrier Reef. But others were writing about that.

Steve Jobs didn't speak at MacWorld, then announced he's taking six months off to nurse himself back to health, causing Apple's stock to tank. I didn't write about that either.

And yesterday, a guy in New York landed a plane on the Hudson river. That was cool and I maybe could have said something about that. But again, it was being done.

But today, I found a video about the original Star Wars trilogy, retold by someone who has never seen the films. Now that's something I could write about. But I don't need to, because I can just show you the video. It's very funny, whether you know the story or not. But it's even better if you do.

You can watch it below or at the Vimeo site.


Star Wars: Retold (by someone who hasn't seen it) from Joe Nicolosi on Vimeo.
Posted by Dave at 6:54 PM No comments: