The scary world of American politics 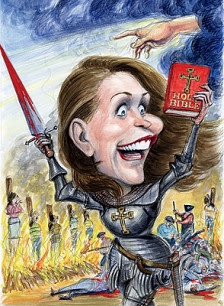 The race for the Republican nomination for the 2012 presidential nomination is heating up across the border. Like many of my friends, I've been amused (and amazed) at the kinds of things that become campaign fodder in that party. Tea party politics, gay rights, big government, big hair - Canadians like to mock the discussion.

But it's disconcerting to see how crazy, ugly and scary things are getting in the US. For example, consider an article in this month's Rolling Stone, Michelle Bachmann's Holy War. The congresswoman is running for president and you won't believe the back story.

Close your eyes, take a deep breath, and, as you consider the career and future presidential prospects of an incredible American phenomenon named Michele Bachmann, do one more thing. Don’t laugh.

It may be the hardest thing you ever do, for Michele Bachmann is almost certainly the funniest thing that has ever happened to American presidential politics. Fans of obscure 1970s television may remember a short-lived children’s show called Far Out Space Nuts, in which a pair of dimwitted NASA repairmen, one of whom is played by Bob (Gilligan) Denver, accidentally send themselves into space by pressing “launch” instead of “lunch” inside a capsule they were fixing at Cape Canaveral. This plot device roughly approximates the political and cultural mechanism that is sending Michele Bachmann hurtling in the direction of the Oval Office.

The profile painted by writer Matt Taibbi is, to say the least, unflattering. But as he notes, don't make the mistake of dismissing her because she's so clearly deluded. Each time her opponents have done that, it's only made her stronger.

In modern American politics, being the right kind of ignorant and entertainingly crazy is like having a big right hand in boxing; you’ve always got a puncher’s chance. And Bachmann is exactly the right kind of completely batshit crazy. Not medically crazy, not talking-to-herself-on-the-subway crazy, but grandiose crazy, late-stage Kim Jong-Il crazy — crazy in the sense that she’s living completely inside her own mind, frenetically pacing the hallways of a vast sand castle she’s built in there, unable to meaningfully communicate with the human beings on the other side of the moat, who are all presumed to be enemies.

This is the dark side of where our world is headed. No longer do political leaders need to be concerned with truth, or even reality. Get prepared for a Presidential campaign that is going to set new standards for what is considered fair game. And the crazier the better, it appears. Nothing is too outlandish.

It's going to be quite a show. Taibbi's profile of Bachmann will be dismissed by her supporters, who will merely note how by attacking her, he's only proving her point. And perhaps that's the scariest part of this. We've arrived at the point where any serious debate about the truth is not possible. The polarization seems complete and there doesn't appear to be any way to have a rational discussion - at least in public. But as the article concludes, those who call Bachmann nuts and want to laugh off her outrageous untruths and outright lies had better be careful.

It could happen. Michele Bachmann has found the flaw in the American Death Star. She is a television camera's dream, a threat to do or say something insane at any time, the ultimate reality-show protagonist. She has brilliantly piloted a media system that is incapable of averting its eyes from a story, riding that attention to an easy conquest of an overeducated cultural elite from both parties that is far too full of itself to understand the price of its contemptuous laughter. All of those people out there aren't voting for Michele Bachmann. They're voting against us. And to them, it turns out, we suck enough to make anyone a contender.

- Link to the whole article here

This is the first article I've read in reaction to the Andrew Weiner controversy that looks at the legitimate issue of how to protect your online privacy.
Posted by Dave at 11:52 AM No comments:

If you use Apple's default email program, Mail, you may have run into this problem.

When I click on the Attachment icon to send someone a file, Mail automatically adds the file as an inline image, which drives me crazy.

I searched through all the preferences, but I couldn't find a way to change this behaviour, so I had to keep right-clicking on the image and choosing "View as Icon" from the menu. That fixed the problem, but it was a pain.

Then I found the answer via Micah Gilman's Blog. Thank you Micah!

If this is a problem for you, you'll appreciate this fix.

I’ve found this to be a real annoyance, especiallly with a business where I have to send images in emails often. Mail.app by default displays images inline, and most email clients won’t recognize them as attachments. If you right click (or ctrl click with a one button mouse) on the image you can select to view the image as icon, which makes it behave like a normal attachment. To make this the default behavior you’ll need to use the Terminal to set the preference. Terminal is in Applications>Utilities. Open Terminal and type:

That will make every attachment you send act like an attachment instead of a pretty unusable decoration.

If you decide this isn’t what you’re looking for, to restore inline attachment viewing type:

Restart Mail and you’re back to normal.

One more thing, if you’re having the issue that Mail is resizing your image like Lissa describes in her comment below, after attaching a file, make sure that you select “Actual Size” from the “Image Size” pulldown in the lower right corner of your message window.

I had heard about this. But I didn't really see what the big deal was. And I sure never thought I'd get it. But it happened.

Today, on the flight to Toronto, (I'm on my way to the CPRS conference in Saint John) I watched Never Say Never, a documentary about this kid from Stratford and his incredible journey to playing a sold-out Madison Square Garden in New York.

It's quite a story. I'd heard some of it of course. Anyone who spends any time in the social media world has heard of Justin Bieber. But I didn't know his music or much of the story.

It's a great story. The documentary is well done, marching us through the short arc of his career - heck, he's only 16 years old. But I loved the movie. I like old musicals and this is a take-off on that genre. We see the live shows, and meet all the backstage characters while we move towards the big night - the MSG gig. There are no surprises here. But the passion is real and we see a lot of talent at work.

It's interesting because we see plenty of footage from Justin's early years thanks to YouTube clips. Most of his career has been captured on video and it's fascinating to watch the evolution. He's lived a lot of his life in front of a camera but unlike child actors, a lot of this stuff is raw and unscripted. You feel like you're often seeing the real thing - not a performance.

The truth is, I like the story, the music and the film. It's a well done feel good story and that's the way I feel.

Enough already. I've got Bieber Fever. What more do I need to say? I think you'll like this movie. I sure did.