The Web Means the End of Forgetting

I am one of those who believe that as a society, we are going to learn to live with the transparency of the Internet. Eventually, we won't hold those crazy things we did as youths against the young men and women who we are hiring for jobs as adults. We'll look at the person they've become and judge accordingly.

Nice sentiment. But as I look around these days, I'm less sure about that position.

The Shirley Sherrod debacle, (not long after the Helen Thomas story) the "holding public figures to higher standards" arguments and the simple "make an accusation even if it doesn't stick" strategy of debate give me pause. Past actions, no matter what they are, are available and ready to be exploited. And it looks like they will be used that way.

If anything, my concerns were amplifed today, with the death of Daniel Schorr. Everyone seems convinced that the integrity and commitment to fairness that he demonstrated died with him. Or so it might seem.

Today, I came across this article, The Web Means the End of Forgetting from the New York Times. It's a well written piece that looks at the impact that our never-to-be-forgotten actions may have down the road, given the nature of our emerging digital age.

It offers a perspective that may influence your view of what's likely to happen.

Four years ago, Stacy Snyder, then a 25-year-old teacher in training at Conestoga Valley High School in Lancaster, Pa., posted a photo on her MySpace page that showed her at a party wearing a pirate hat and drinking from a plastic cup, with the caption “Drunken Pirate.” After discovering the page, her supervisor at the high school told her the photo was “unprofessional,” and the dean of Millersville University School of Education, where Snyder was enrolled, said she was promoting drinking in virtual view of her under-age students. As a result, days before Snyder’s scheduled graduation, the university denied her a teaching degree. Snyder sued, arguing that the university had violated her First Amendment rights by penalizing her for her (perfectly legal) after-hours behavior. But in 2008, a federal district judge rejected the claim, saying that because Snyder was a public employee whose photo didn’t relate to matters of public concern, her “Drunken Pirate” post was not protected speech.

The issue, of course, is that even if we accept that the Internet is going to extract a high price for those pictures being posted on Facebook these days, it does nothing to solve the problem. Kids will be kids, as they say, and I doubt very much that they'll stop doing the things that kids do - nor do I think that we necessarily want them to.

Those "spirited" children, full of endless energy, enthusiasm for life and curious about everything are a handful to deal with when they're young. But they often turn into some of our most interesting people as they age. We want them to explore life, push the boundaries and test their own limits. That's what growing up is all about. If we start warning them about the long-term consequences of their actions and force them to rein in all that natural enthusiasm, we'll pay a larger price as a society.

Now I really don't know what to think about the future. I'd welcome your comments.

Flickr photo via Rafael Robayna
Posted by Dave at 3:25 PM No comments: 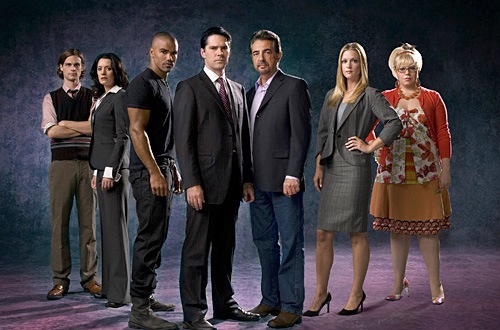 I don't know why but I've always been interested in criminal profiling, like the types developed as a speciality by the FBI. Lately, the genre has been turned into entertainment by shows like Criminal Minds, which feature the antics of a group of FBI profilers.

I suspect I am attracted to the genre because I like logic and I like to see it used in action. I like things to fit together and its fun when someone figures out how things work. And let's face it, there's a bit of the "carny" aspect to profilers. They look at a bunch of things and then start drawing a portrait of what the serial killer looks like and how he thinks and what he might be thinking. And sometimes they seem to be right.

When Criminal Minds first began, I was impressed. The writing was good and the characters were a lot of fun to get to know. But something bad has happened to the series - to the point where I can't even watch it now. When it began, we didn't know any more about the killers than the team did. We watched as they gathered clues and put together the story, while we followed along. There was the usual license taken with space and time and technology, but in general, the episodes were character driven and smartly done.

But now, the show has degenerated into a silly parody of itself. We are usually shown the killer right off the bat and watch while the team makes improbable connections to come up with the answer that we knew about all along. And the characters are caricatures of themselves. It's hard to believe they can take seriously the lines they're forced to repeat. It must be frustrating as an actor to see your character turned into a cartoon-like dummy.

That little rant on Criminal Minds is my way of backing into an article I came across on FBI profiling in The New Yorker, posted on writer Malcolm Gladwell's website. (By the way, the New Yorker Archive of articles he's done for the magazine over the last 14 years is a real treasure-trove of interesting stuff.)

The article is called Dangerous Minds and it delves into the history of criminal profiling. It was written back in 2007 but I haven't come across it before. It starts off with a look at some famous profiling success stories and the people who were a part of them. But as it moves along, you begin to realize that those successes are not all they appear to be.

As Gladwell develops his theme, you realize how much of what is going on can be likened to the type of thing that an accomplished "psychic" can do by asking questions and refining their probing based on the answers they receive. When its done well, just about anyone can start to believe that the person is coming up with genuine insights.

Astrologers and psychics have known these tricks for years. The magician Ian Rowland, in his classic "The Full Facts Book of Cold Reading," itemizes them one by one, in what could easily serve as a manual for the beginner profiler. First is the Rainbow Ruse—the "statement which credits the client with both a personality trait and its opposite." ("I would say that on the whole you can be rather a quiet, self effacing type, but when the circumstances are right, you can be quite the life and soul of the party if the mood strikes you.") The Jacques Statement, named for the character in "As You Like It" who gives the Seven Ages of Man speech, tailors the prediction to the age of the subject. To someone in his late thirties or early forties, for example, the psychic says, "If you are honest about it, you often get to wondering what happened to all those dreams you had when you were younger." There is the Barnum Statement, the assertion so general that anyone would agree, and the Fuzzy Fact, the seemingly factual statement couched in a way that "leaves plenty of scope to be developed into something more specific." ("I can see a connection with Europe, possibly Britain, or it could be the warmer, Mediterranean part?") And that's only the start: there is the Greener Grass technique, the Diverted Question, the Russian Doll, Sugar Lumps, not to mention Forking and the Good Chance Guess—all of which, when put together in skillful combination, can convince even the most skeptical observer that he or she is in the presence of real insight.

The article got me thinking about the nature of profiling and certainly raised some interesting questions. In many ways, it mirrors the evolution of the TV show spawned by it. What starts off as a convincing demonstration of some clever insights turn start to look tired and less convincing the more you know about it.

The changing face of TV News

Global became the second national TV network in Canada to announce that a woman will be taking over the anchor chair in the coming months.

That comes on the heels of the news that Lloyd Robertson is retiring next year and will be turning over his anchor desk at CTV to Lisa LaFlamme.

It's a change that seems obvious enough but it took awhile. Personally, I'm looking forward to the new faces. I don't watch TV news that often but I think the changes will only benefit the programs.

The next question is what's going to happen at CBC? Peter Mansbridge has been there a long time. Sooner or later, they're going to need a new anchor as well.
Posted by Dave at 1:28 PM No comments:

Millions of starlings swarm over Rome

Sometimes you come across something that makes you say, "Hey - this is pretty cool!"

I came across it on the 37signals blog.

Tomorrow I'm heading off to Parksville to celebrate the end of an amazing era. My Dad's 98-year-old brother - my Uncle Alan - died awhile ago. This Saturday the Traynor clan is gathering for his memorial service.

Alan was the last remaining of the five Traynor brothers. They were orphaned in 1917 and raised by a remarkable young woman who kept them all together.

Alan was a gentleman and a grand patriarch. I was lucky to have gotten to know him well in recent years and I treasure the visits we had.

And to die at 98, in your own bed, with all your faculties and surrounded by loved ones is a pretty good way to go.