I'm back in Hamilton, safe and sound. We arrived late Saturday night, after a long, long drive from Wisconsin. Actually, it ended up a little longer than I expected, when I missed the transition from Hwy 2 to 28, so we took the long way across the top of Michigan. But we did make it home without any more problems.

Today, I've been glued to the TV, watching the coverage of Hurrican Katrina on CNN. What a show! I tend to be a bit cynical about the way that TV covers these dramatic events, but I've got to admit, I'm hooked.

True, the people on air are kind of crazy. They love to stand outside in the driving wind and rain when they should be just watching from inside...but it does make for compelling TV. And it's pretty much kept me from doing any useful work this morning. I'm just glad I'm far enough away not to be part of a storm like this. Talk about the power of Mother Nature!
Posted by Dave at 10:13 AM No comments:

Back on the road again

It's been a long time between posts, I know. But I took a real vacation for the past couple of weeks...it's been great. I'm on my way back to Hamilton right now...at the moment, we're in a hotel in Winnipeg, on the first day of our trip back.

I don't have any cool pictures of the trip to post...but I thought I'd put up this image of the view off the deck at Buena Vista. Those tiny white sails you see are the boats competing in the sailing competition of the Canada Games a couple of weeks ago. It was great fun watching all the action while we sat at the cottage.

Anyway, I'll be back home in a couple of days and then posting can get back to normal...whatever the heck that is! Time for this consultant to go back to getting clients and making money again. There are university bills to be paid, after all.
Posted by Dave at 8:11 PM No comments:

Well, here it is, nearly a week since my last post and I’m only now getting around to letting you know how things went at the Henley Regatta.

Oh well, I guess that’s what happens when you’re on holiday. I’m here at my cottage in Buena Vista, just outside Regina, Saskatchewan, where I’ve been enjoying a great run of nice weather. While I might start the day thinking of a few things to get around to, I seem to end up just muddling around. Updating my blog has not been on the top of my agenda.

But enough excuses. Here’s the update on stuff from Henley.

Jaime and her partner, Jess Southall, didn’t qualify their double in the semi’s, but they were still really pleased with their performance.

In the singles final, Jaime got fifth place, about eight seconds back of the gold medalist. While she would have loved a medal, she was really pleased with her race and she’s already looking forward to next year. She’s got three years left in her Senior B. category, so she’s in good shape to medal yet.

As you know, Kelly didn’t qualify for the singles’ final, which was a major disappointment. But in her doubles race, she and her partner, Laura Ceyrs, had a great run. They finished second in their semi, then had a great race in the final to come home with a bronze medal. Kelly says it was their best race ever and they are both really pleased with their result.

Today Jaime arrives here in Regina, ready for a two-week holiday before heading on to Victoria and another year at UVIC. Kelly and Spencer arrive in a week, so we’ll have a lot of fun showing him around Kelly’s home town.

That’s it for today. As I mentioned, I’m on holiday mode, so I’m not sure when I’ll have more to add. But in the meantime, feel free to add a comment here. I do check my mail from time to time and I love to get feedback. 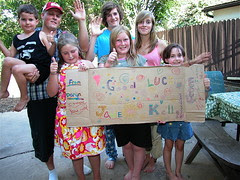 Day 2 of Henley, 2005 is in the books...and as you can see, everyone here in Saskatchewan is cheering on Jaime and Kelly! This is a shot of all the Wood family cousins (minus J&K of course) at a BBQ at Blair's house in Regina on Monday night.

Today (Wed) was Day 2 of Henley. Day 1 saw both Jaime and Kelly qualify for the singles semi-finals, with great races. Today, they each had a heat in their doubles, with the singles semi as well.

Both Jaime and Kelly qualified today for the semis on Thursday in their doubles. Whoo hoo!

And in the single semi's, the good news continued with Jaime qualifying for the final race in her single, finishing second in her semi-final. Way to go Jaime!

Kelly, on the other hand, suffered through a difficult race and finished fourth in her semi, just missing a chance at the single final. She's frustrated because she was rowing a lot slower than in the Ontario championships 2 weeks ago. In fact, the girl she beat in that race qualified two positions ahead of her today. The extreme heat of the last few weeks seems to be taking a toll on her.

In the doubles races, Jaime and her partner ended up in a dead heat for the third and final qualifying position. Both boats were timed at 8:05.51 and a photo finish couldn't determine which was ahead, so they'll both be in the semi-final. What an amazing result! Jaime says it was definitely hers and Jess's best race of the year and they're thrilled to be moving on.

Meanwhile, Kelly and her partner, Laura, cruised to an easy qualifying position by winning their heat. They said it was a great race and they were never pushed during the race. Now they're ready for a much tougher semi-final race on Thursday.

The link to the results page has been working great so far. It's a little nerve-wracking not to be able to find out how the race is going, but when those results come up, I can cheer just like I'm in the stands...

While I really do wish I was there to watch, I'm really glad to be able to follow things so closely. Between my laptop here at the Traynor cottage, a stable (but slow) Internet connection and cell phones, I've been able to keep right on top of things. Ah, technology...what a cool thing it is when it all works.